Traditionally, two common temperature references are the melting point of pure ice and the boiling point of pure water at sea level. The melting point of ice is 0° C or 32° F; the boiling point of water is 100° C or 212° F. Thus, the difference between melting and boiling is 100 degrees Celsius or 180 degrees Fahrenheit; the ratio between degrees Celsius and Fahrenheit is 100/180 or 5/9. Since 0° F is 32 Fahrenheit degrees colder than 0° C, you must apply this difference when comparing temperatures on the two scales. You can convert from one scale to the other using one of the following formulae:

where C is degrees Celsius and F is degrees Fahrenheit. Figure 3 compares the two scales. Many flight computers provide for direct conversion of temperature from one scale to the other. Section 16, AVIATION WEATHER SERVICES has a graph for temperature conversion.

Temperature we measure with a thermometer. But what makes a thermometer work? Simply the addition or removal of heat. Heat and temperature are not the same; how are they related? 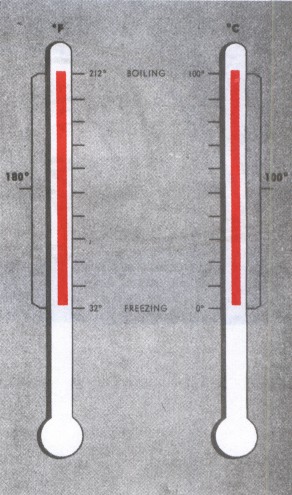