In addition to its daily rotation, the Earth revolves in a complete orbit around the sun once each year. Since the axis of the Earth tilts to the plane of orbit, the angle of incident solar radiation varies seasonally between hemispheres. The Northern Hemisphere is warmer in June, July, and August because it receives more solar energy than does the Southern Hemisphere. During December, January, and February, the opposite is true; the Southern Hemisphere receives more solar energy and is warmer. Figures 4 and 5 show these seasonal surface temperature variations. 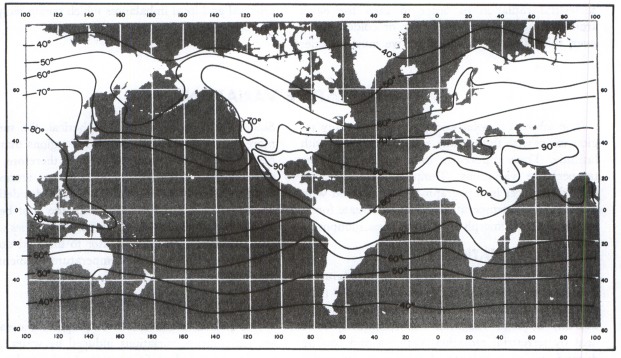 FIGURE 4. World-wide average surface temperatures in July. In the Northern Hemisphere, continents generally are warmer than oceanic areas at corresponding latitudes. The reverse is true in the Southern Hemisphere, but the contrast is not so evident because of the sparcity of land surfaces. 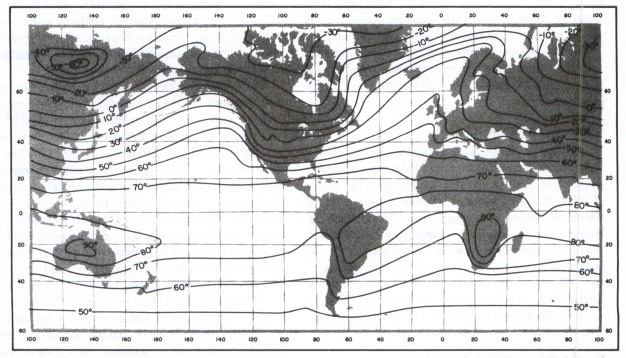 The shape of the Earth causes a geographical variation in the angle of incident solar radiation. Since the Earth is essentially spherical, the sun is more nearly overhead in equatorial regions than at higher latitudes. Equatorial regions, therefore, receive the most radiant energy and are warmest. Slanting rays of the sun at higher latitudes deliver less energy over a given area with the least being received at the poles. Thus, temperature varies with latitude from the warm Equator to the cold poles. You can see this average temperature gradient in figures 4 and 5.

These topographical influences are both diurnal and seasonal. For example, the difference between a daily maximum and minimum may be 10° or less over water, near a shore line, or over a swamp or marsh, while a difference of 50° or more is common over rocky or sandy deserts. Figures 4 and 5 show the seasonal topographical variation. Note that in the Northern Hemisphere in July, temperatures are warmer over continents than over oceans; in January they are colder over continents than over oceans. The opposite is true in the Southern Hemisphere, but not as pronounced because of more water surface in the Southern Hemisphere.

To compare land and water effect on seasonal temperature variation, look at northern Asia and at southern California near San Diego. In the deep continental interior of northern Asia, July average temperature is about 50° F; and January average, about −30° F. Seasonal range is about 80° F. Near San Diego, due to the proximity of the Pacific Ocean, July average is about 70° F and January average, 50° F. Seasonal variation is only about 20° F.

Abrupt temperature differences develop along lake and ocean shores. These variations generate pressure differences and local winds which we will study in later chapters. Figure 6 illustrates a possible effect. 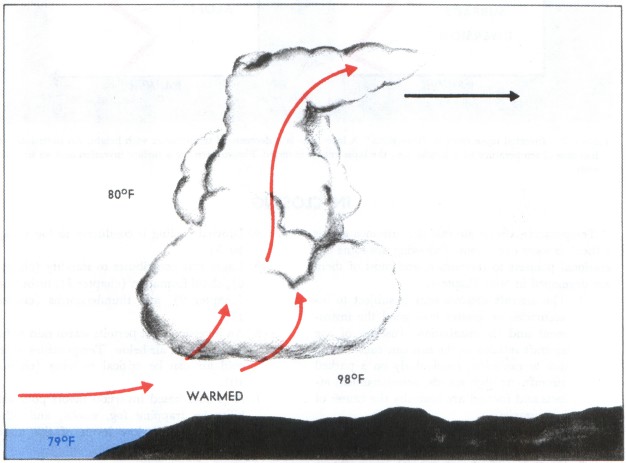 An inversion often develops near the ground on clear, cool nights when wind is light. The ground radiates and cools much faster than the overlying air. Air in contact with the ground becomes cold while the temperature a few hundred feet above changes very little. Thus, temperature increases with height. Inversions may also occur at any altitude when conditions are favorable. For example, a current of warm air aloft overrunning cold air near the surface produces an inversion aloft. Figure 7 diagrams temperature inversions both surface and aloft. Inversions are common in the stratosphere. 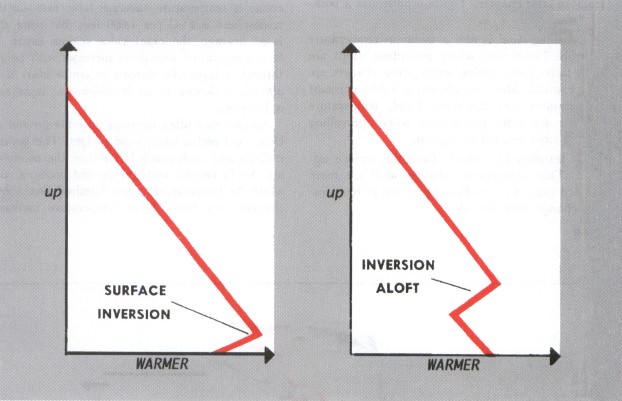 Table of Contents
Previous Section: Heat and Temperature
Next Section: In Closing