Let's use a balloon to demonstrate stability and instability. In figure 42 we have, for three situations, filled a balloon at sea level with air at 31° C—the same as the ambient temperature. We have carried the balloon to 5,000 feet. In each situation, the air in the balloon expanded and cooled at the dry adiabatic rate of 3° C for each 1,000 feet to a temperature of 16° C at 5,000 feet. 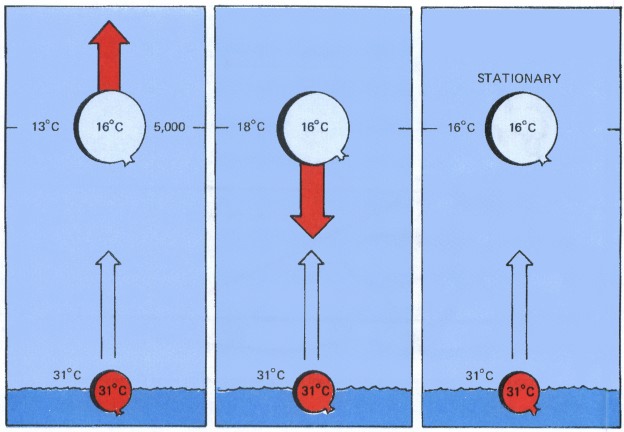 FIGURE 42. Stability related to temperatures aloft and adiabatic cooling. In each situation, the balloon is filled at sea level with air at 31° C, carried manually to 5,000 feet, and released. In each case, air in the balloon expands and cools to 16° C (at the dry adiabatic rate of 3° C per 1,000 feet). But, the temperature of the surrounding air aloft in each situation is different. The balloon on the left will rise. Even though it cooled adiabatically, the balloon remains warmer and lighter than the surrounding cold air; when released, it will continue upward spontaneously. The air is unstable; it favors vertical motion. In the center, the surrounding air is warmer. The cold balloon will sink. It resists our forced lifting and cannot rue spontaneously. The air is stable—it resists upward motion. On the right, surrounding air and the balloon are at the same temperature. The balloon remains at rest since no density difference exists to displace it vertically. The air is neutrally stable, i.e., it neither favors nor resists vertical motion. A mass of air in which the temperature decreases rapidly with height favors instability; but, air tends to be stable if the temperature changes little or not at all with altitude.

In the first situation (left), air inside the balloon, even though cooling adiabatically, remains warmer than surrounding air. Vertical motion is favored. The colder, more dense surrounding air forces the balloon on upward. This air is unstable, and a convective current develops.

In situation two (center) the air aloft is warmer. Air inside the balloon, cooling adiabatically, now becomes colder than the surrounding air. The balloon sinks under its own weight returning to its original position when the lifting force is removed. The air is stable, and spontaneous convection is impossible.

In the last situation, temperature of air inside the balloon is the same as that of surrounding air. The balloon will remain at rest. This condition is neutrally stable; that is, the air is neither stable nor unstable.

Note that, in all three situations, temperature of air in the expanding balloon cooled at a fixed rate. The differences in the three conditions depend, therefore, on the temperature differences between the surface and 5,000 feet, that is, on the ambient lapse rates.

HOW STABLE OR UNSTABLE?

Stability runs the gamut from absolutely stable to absolutely unstable, and the atmosphere usually is in a delicate balance somewhere in between. A change in ambient temperature lapse rate of an air mass can tip this balance. For example, surface heating or cooling aloft can make the air more unstable; on the other hand, surface cooling or warming aloft often tips the balance toward greater stability.

Chapter 5 states that when air is cooling and first becomes saturated, condensation or sublimation begins to form clouds. Chapter 7 explains cloud types and their significance as “signposts in the sky.” Whether the air is stable or unstable within a layer largely determines cloud structure.

Since stable air resists convection, clouds in stable air form in horizontal, sheet-like layers or “strata.” Thus, within a stable layer, clouds are stratiform. Adiabatic cooling may be by upslope flow as illustrated in figure 43; by lifting over cold, more dense air; or by converging winds. Cooling by an underlying cold surface is a stabilizing process and may produce fog. If clouds are to remain stratiform, the layer must remain stable after condensation occurs.

Unstable air favors convection. A “cumulus” cloud, meaning “heap,” forms in a convective updraft and builds upward, also shown in figure 43. Thus, within an unstable layer, clouds are cumuliform; and the vertical extent of the cloud depends on the depth of the unstable layer.

Initial lifting to trigger a cumuliform cloud may be the same as that for lifting stable air. In addition, convection may be set off by surface heating (chapter 4). Air may be unstable or slightly stable before condensation occurs; but for convective cumuliform clouds to develop, it must be unstable after saturation. Cooling in the updraft is now at the slower moist adiabatic rate because of the release of latent heat of condensation. Temperature in the saturated updraft is warmer than ambient temperature, and convection is spontaneous. Updrafts accelerate until temperature within the cloud cools below the ambient temperature. This condition occurs where the unstable layer is capped by a stable layer often marked by a temperature inversion. Vertical heights range from the shallow fair weather cumulus to the giant thunderstorm cumulonimbus—the ultimate in atmospheric instability capped by the tropopause. 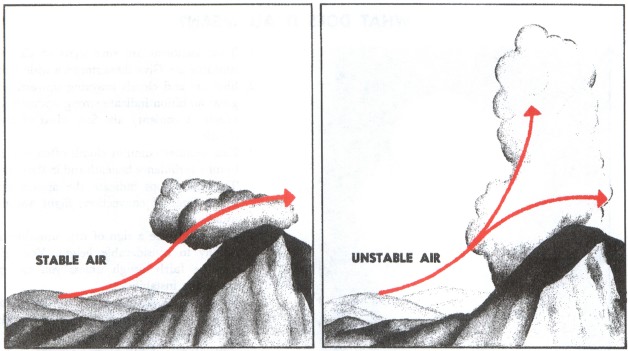 You can estimate height of cumuliform cloud bases using surface temperature-dew point spread. Unsaturated air in a convective current cools at about 5.4° F (3.0° C) per 1,000 feet; dew point decreases at about 1° F (5/9° C). Thus, in a convective current, temperature and dew point converge at about 4.4° F (2.5° C) per 1,000 feet as illustrated in figure 44. We can get a quick estimate of a convective cloud base in thousands of feet by rounding these values and dividing into the spread or by multiplying the spread by their reciprocals. When using Fahrenheit, divide by 4 or multiply by .25; when using Celsius, divide by 2.2 or multiply by .45. This method of estimating is reliable only with instability clouds and during the warmer part of the day. 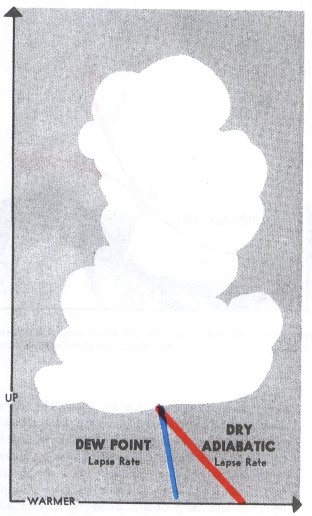 FIGURE 44. Cloud base determination. Temperature and dew point in upward moving air converge at a rate of about 4° F or 2.2° C per 1,000 feet.

Table of Contents
Previous Section: Changes Within Upward and Downward Moving Air
Next Section: What Does It All Mean