An aircraft receives its lift by accelerating a mass of air downward. Thus, whenever the wings are providing lift, air is forced downward under the wings generating rotary motions or vortices off the wing tips. When the landing gear bears the entire weight of the aircraft, no wing tip vortices develop. But the instant the pilot “hauls back” on the controls, these vortices begin. Figure 87 illustrates how they might appear if visible behind the plane as it breaks ground. These vortices continue throughout the flight and until the craft again settles firmly on its landing gear.

These vortices spread downward and outward from the flight path. They also drift with the wind. Strength of the vortices is proportional to the weight of the aircraft as well as other factors. Therefore, wake turbulence is more intense behind large, transport category aircraft than behind small aircraft. Generally, it is a problem only when following the larger aircraft.

The turbulence persists several minutes and may linger after the aircraft is out of sight. At controlled airports, the controller generally warns pilots in the vicinity of possible wake turbulence. When left to your own resources, you could use a few pointers. Most jets when taking off lift the nose wheel about midpoint in the takeoff roll; therefore, vortices begin about the middle of the takeoff roll. Vortices behind propeller aircraft begin only a short distance behind lift-off. Following a landing of either type of aircraft, vortices end at about the point where the nose wheel touches down. Avoid flying through these vortices. More specifically, when using the same runway as a heavier aircraft:

(1) if landing behind another aircraft, keep your approach above his approach and keep your touchdown beyond the point where his nose wheel touched the runway (figure 88 (A)); 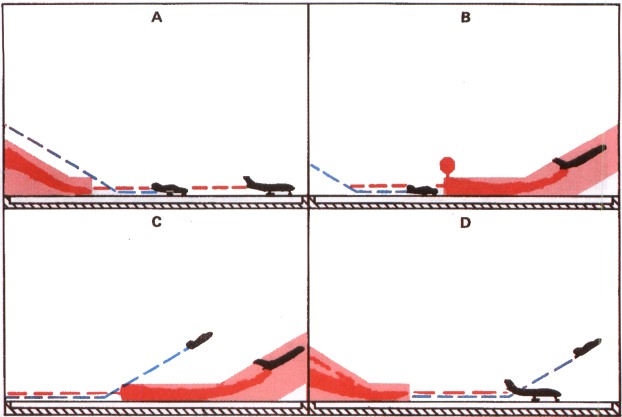 (2) if landing behind a departing aircraft, land only if you can complete your landing roll before reaching the midpoint of his takeoff roll (figure 88 (B));

(3) if departing behind another departing aircraft, take off only if you can become airborne before reaching the midpoint of his takeoff roll and only if you can climb fast enough to stay above his flight path (figure 88 (C)); and

(4) if departing behind a landing aircraft, don't unless you can taxi onto the runway beyond the point at which his nose wheel touched down and have sufficient runway left for safe takeoff (figure 88 (D)).

If parallel runways are available and the heavier aircraft takes off with a crosswind on the downwind runway, you may safely use the upwind runway. Never land or take off downwind from the heavier aircraft. When using a runway crossing his runway, you may safely use the upwind portion of your runway. You may cross behind a departing aircraft behind the midpoint of his takeoff roll. You may cross ahead of a landing aircraft ahead of the point at which his nose wheel touches down. If none of these procedures is possible, wait 5 minutes or so for the vortices to dissipate or to blow off the runway.

The foregoing procedures are elementary. The problem of wake turbulence is more operational than meteorological. The FAA issues periodic advisory circulars of operational problems. If you plan to operate out of airports used routinely by air carriers, we highly recommend you read the latest advisory circulars on wake turbulence. Titles of these circulars are listed in the FAA “Advisory Circular Checklist and Status of Regulations.”