OTHER FACTORS IN ICING

In addition to the above, other factors also enter into icing. Some of the more important ones are discussed below.

A condition favorable for rapid accumulation of clear icing is freezing rain below a frontal surface. Rain forms above the frontal surface at temperatures warmer than freezing. Subsequently, it falls through air at temperatures below freezing and becomes supercooled. The supercooled drops freeze on impact with an aircraft surface. Figure 98 diagrams this type of icing. It may occur with either a warm front (top) or a cold front. The icing can be critical because of the large amount of supercooled water. Icing can also become serious in cumulonimbus clouds along a surface cold front, along a squall line, or embedded in the cloud shield of a warm front. 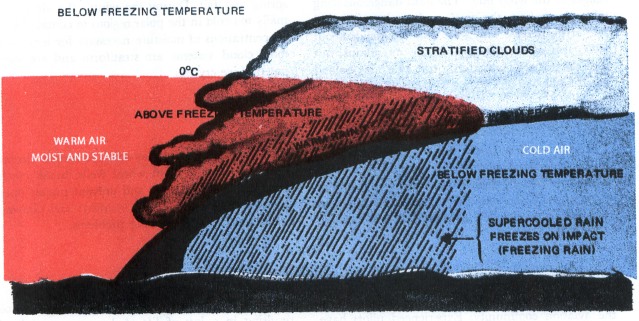 into subfreezing cold air near the ground. The rain becomes supercooled and freezes on impact.

Air blowing upslope is cooled adiabatically. When the air is cooled below the freezing point, the water becomes supercooled. In stable air blowing up a gradual slope, the cloud drops generally remain comparatively small since larger drops fall out as rain. Ice accumulation is rather slow and you should have ample time to get out of it before the accumulation becomes extremely dangerous. When air is unstable, convective clouds develop a more serious hazard as described in “Icing and Cloud Types.”

Icing is more probable and more hazardous in mountainous regions than over other terrain. Mountain ranges cause rapid upward air motions on the windward side, and these vertical currents support large water drops. The movement of a frontal system across a mountain range often combines the normal frontal lift with the upslope effect of the mountains to create extremely hazardous icing zones.

Each mountainous region has preferred areas of icing depending upon the orientation of mountain ranges to the wind flow. The most dangerous icing takes place above the crests and to the windward side of the ridges. This zone usually extends about 5,000 feet above the tops of the mountains; but when clouds are cumuliform, the zone may extend much higher.

Icing may occur during any season of the year; but in temperate climates such as cover most of the contiguous United States, icing is more frequent in winter. The freezing level is nearer the ground in winter than in summer leaving a smaller low-level layer of airspace free of icing conditions. Cyclonic storms also are more frequent in winter, and the resulting cloud systems are more extensive. Polar regions have the most dangerous icing conditions in spring and fall. During the winter the air is normally too cold in the polar regions to contain heavy concentrations of moisture necessary for icing, and most cloud systems are stratiform and are composed of ice crystals.