Climate of any region is largely determined by the amount of energy received from the sun; but local characteristics of the area also influence climate.

A profound seasonal change in length of day and night occurs in the Arctic because of the Earth's tilt and its revolution around the sun. Figure 132 shows that any point north of the Arctic Circle has autumn and winter days when the sun stays all day below the horizon and days in spring and summer with 24 hours of sunshine. The number of these days increases toward the North Pole; there the sun stays below the horizon for 6 months and shines continuously during the other 6 months. 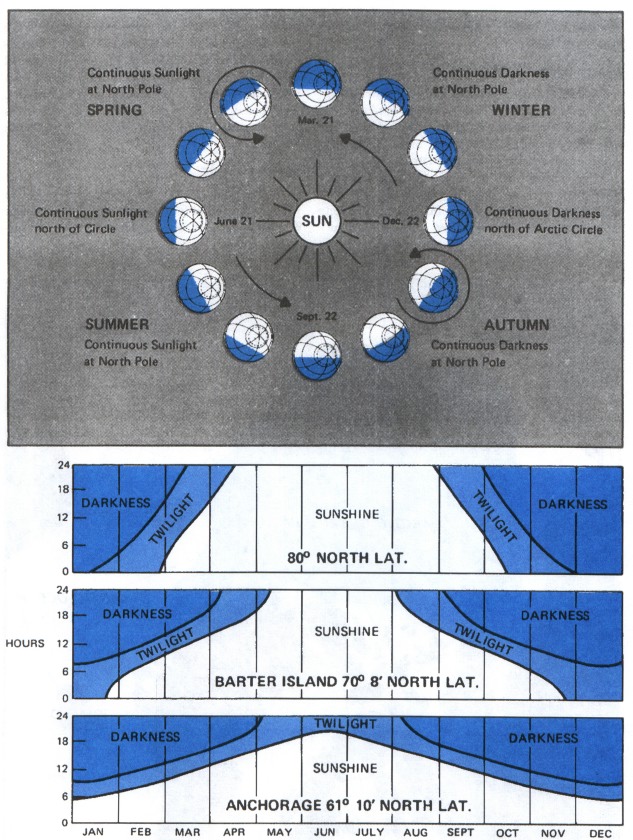 FIGURE 132. Sunshine in the Northern Hemisphere. The sun shines a full 24 hours on the entire area north of the Arctic Circle (top) on June 21; the amount of sunshine decreases until none falls anywhere in the area on December 22. Graphs (below) show duration of sunshine and nautical twilight per day at two points north of the Arctic Circle and for Anchorage, Alaska, at a latitude about 5½° south of the circle.

Twilight in the Arctic is prolonged because of the shallow angle of the sun below the horizon. In more northern latitudes, it persists for days when the sun remains just below the horizon. This abundance of twilight often makes visual reference possible at night.

A large portion of the Arctic Ocean is covered throughout the year by a deep layer of ice—the permanent ice pack as shown in figure 133. Even though the ocean is ice-covered through much of the year, the ice and the water below contain more heat than the surrounding cold land, thus moderating the climate to some extent. Oceanic and coastal areas have a milder climate during winter than would be expected and a cool climate in summer. As opposed to large water bodies, large land areas show a more significant seasonal temperature variation. 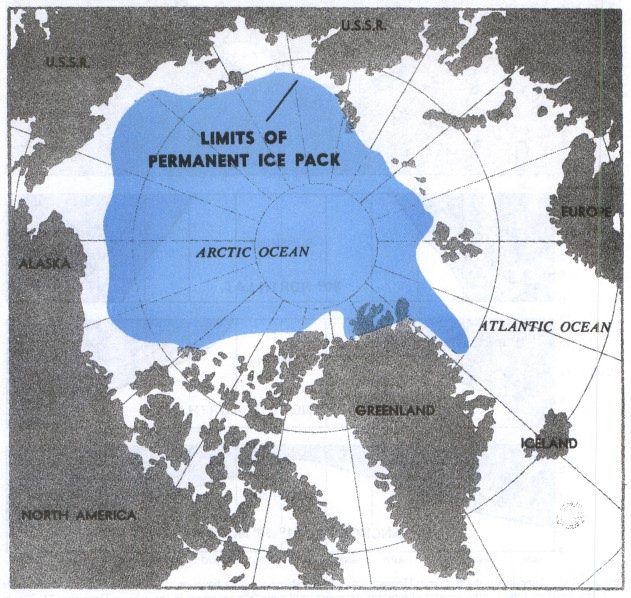 As one would expect, the Arctic is very cold in winter; but due to local terrain and the movement of pressure systems, occasionally some areas are surprisingly warm. During winter, coastal areas average about 20 degrees warmer than the interior. During summer, interior areas are pleasantly warm with many hours of sunshine. Coastal areas have relatively cool short summers due to their proximity to water.

Cloudiness over the Arctic is at a minimum during winter reaching a maximum in summer and fall, figure 134. Spring also brings many cloudy days. During summer afternoons, scattered cumulus clouds forming over the interior occasionally grow into thundershowers. These thundershowers, usually circumnavigable, move generally from northeast to southwest in the polar easterlies which is opposite the general movement in midlatitudes. 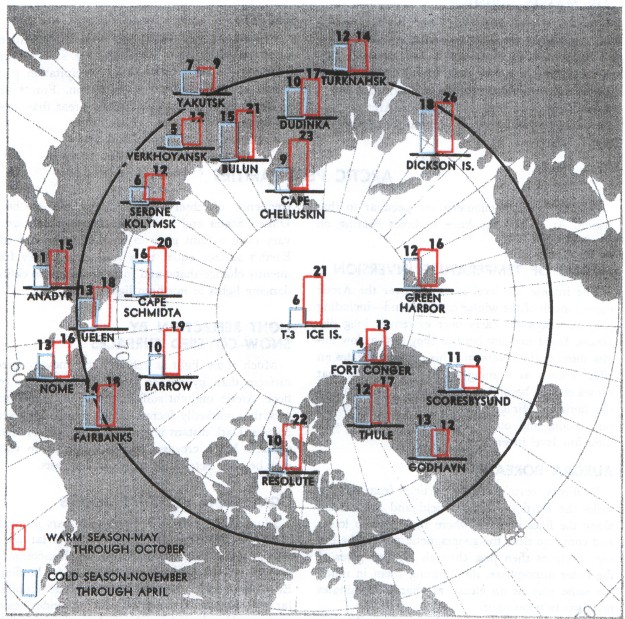 Precipitation in the Arctic is generally light. Annual amounts over the ice pack and along the coastal areas are only 3 to 7 inches. The interior is somewhat wetter, with annual amounts of 5 to 15 inches. Precipitation falls mostly in the form of snow over ice caps and oceanic areas and mostly as summer rain over interior areas.

Strong winds occur more often along the coasts than elsewhere. The frequency of high winds in coastal areas is greatest in fall and winter. Wind speeds are generally light in the continental interior during the entire year, but are normally at their strongest during summer and fall.

In winter, air masses form over the expanded ice pack and adjoining snow-covered land areas. These air masses are characterized by very cold surface air, very low humidity, and strong low-level temperature inversions. Occasionally, air from unfrozen ocean areas flows northward over the Arctic. These intrusions of moist, cold air account for most of the infrequent wintertime cloudiness and precipitation in the Arctic.

During the summer, the top layer of the Arctic permafrost layer melts leaving very moist ground, and the open water areas of the Polar Basin increase markedly. Thus, the entire area becomes more humid, relatively mild, and semimaritime in character. The largest amount of cloudiness and precipitation occurs inland during the summer months.