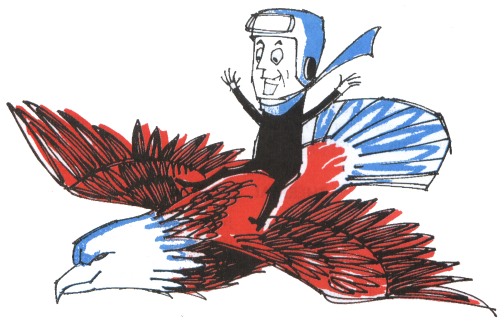 While horse racing may be the “Sport of Kings,” soaring may be considered the “King of Sports.” Soaring bears the relationship to flying that sailing bears to power boating. Soaring has made notable contributions to meteorology. For example, soaring pilots have probed thunderstorms and mountain waves with findings that have made flying safer for all pilots. However, soaring is primarily recreational.

A sailplane must have auxiliary power to become airborne such as a winch, a ground tow, or a tow by a powered aircraft. Once the sailcraft is airborne and the tow cable released, performance of the craft depends on the weather and the skill of the pilot. Forward thrust comes from gliding downward relative to the air the same as thrust is developed in a power-off glide by a conventional aircraft. Therefore, to gain or maintain altitude, the soaring pilot must rely on upward motion of the air.

To a sailplane pilot, “lift” means the rate of climb he can achieve in an up-current, while “sink” denotes his rate of descent in a downdraft or in neutral air. “Zero sink” means that upward currents are just strong enough to enable him to hold altitude but not to climb. Sailplanes are highly efficient machines; a sink rate of a mere 2 feet per second provides an airspeed of about 40 knots, and a sink rate of 6 feet per second gives an airspeed of about 70 knots. Some two-place training craft have somewhat higher sink rates.

In lift, a sailplane pilot usually flies 35 to 40 knots with a sink rate of about 2 feet per second. Therefore, if he is to remain airborne, he must have an upward air current of at least 2 feet per second. There is no point in trying to soar until weather conditions favor vertical speeds greater man the minimum sink rate of the aircraft. These vertical currents develop from several sources, and these sources categorize soaring into five classes: (1) Thermal Soaring, (2) Frontal Soaring, (3) Sea Breeze Soaring, (4) Ridge or Hill Soaring, and (5) Mountain Wave Soaring.