In many coastal areas during the warm seasons, a pleasant breeze from the sea occurs almost daily. Caused by the heating of land on warm, sunny days, the sea breeze usually begins during early forenoon, reaches a maximum during the afternoon, and subsides around dusk after the land has cooled. The leading edge of the cool sea breeze forces warmer air inland to rise as shown in figure 165. Rising air from over land returns seaward at higher altitude to complete the convective cell. 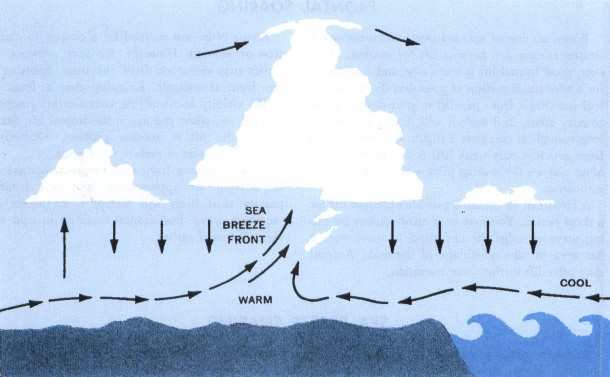 FIGURE 165. Schematic cross section through a sea breeze front. If the air inland is moist, cumulus often marks the front.

A sailplane pilot operating in or near coastal areas often can find lift generated by this convective circulation. The transition zone between the cool, moist air from the sea and the warm, drier air inland is often narrow and is a shallow, ephemeral kind of pseudo-cold front.

The properties of a sea breeze front and the extent of its penetration inland depend on factors such as the difference in land and sea water temperatures, general wind flow, moisture, and terrain.

A large difference in land and sea water temperature intensifies the convective cell generating a sea breeze. Where coastal waters are quite cool, such as along the California coast, and land temperatures warm rapidly in the daytime, the sea breeze becomes pronounced, penetrating perhaps 50 to 75 miles inland at times. Copious sunshine and cool sea waters favor a well-developed sea breeze front.

Strength and Direction of General Wind

When convection is very deep, the frontal effect of a sea breeze may sometimes trigger cumulonimbus clouds provided the lifted air over land contains sufficient moisture. More often, the cumulus are of limited vertical extent. Over vegetation where air is usually moist, sea breeze cumulus are the rule. Over arid regions, little or no cumulus development may be anticipated with a sea breeze front.

Irregular or rough terrain in a coastal area may amplify the sea breeze front and cause convergence lines of sea breezes originating from different areas. Southern California and parts of the Hawaiian Islands are favorable for sea breeze soaring because orographic lift is added to the frontal convection. Sea breezes occasionally may extend to the leeward sides of hills and mountains unless the ranges are high and long without abrupt breaks. In either case, the sea breeze front converges on the windward slopes, and upslope winds augment the convection. Where terrain is fairly flat, sea breezes may penetrate inland for surprising distances but with weaker lift along the sea breeze front. In the Tropics, sea breezes sometimes penetrate as much as 150 miles inland, while an average of closer to 50 miles inland is more usual in middle latitudes. Sea breezes reaching speeds of 15 to 25 knots are not uncommon.

When a sea breeze front develops, visual observations may provide clues to the extent of lift that you may anticipate, viz.:

Unfortunately, a sea breeze front is not always easy to find, and it is likely that many an opportunity for sea breeze soaring goes unnoticed. As yet, little experience has been accrued in locating a belt of sea breeze lift without visual clues such as clouds, haze, or converging smoke or dust plumes. As the sport of soaring grows, so will the knowledge of sea breeze soaring expand and the peculiarities of more local areas come to light. In the United States, the area where the most experience probably has been gained is over the southern California high desert where the sea breeze moves eastward over the Los Angeles Coastal Plain into the Mojave Desert.

The sea breeze front moving from the Los Angeles coastal plain into the Mojave Desert has been dubbed the “Smoke Front.” It has intense thermal activity and offers excellent lift along the leading edge of the front. Associated with the sea breeze that moves inland over the Los Angeles coastal plain are two important zones of convergence, shown in figure 166. Sea breezes of different origin meet in the convergence zones producing vertical currents capable of supporting sailplanes. One convergence line is the “San Fernando Convergence Zone;” a larger scale zone is in the Elsinore area, also shown in figure 166. This convergence zone apparently generates strong vertical currents since soaring pilots fly back and forth across the valley along the line separating smoky air to the north from relatively clear air to the south. Altitudes reached depend upon the stability, but usually fall within the 6,000 feet to 12,000 feet ASL range for the usual dry thermal type lift. Seaward, little or no lift is experienced in the sea breeze air marked by poor visibility. 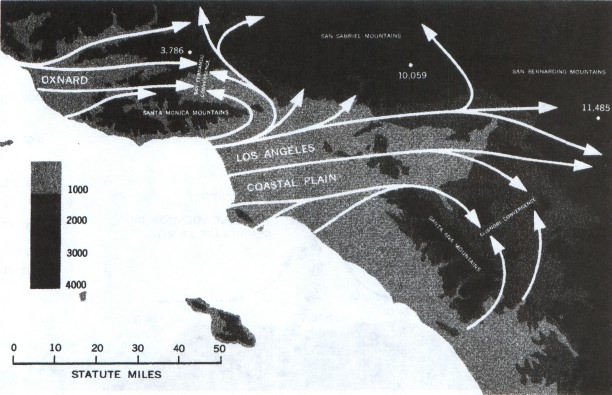 Figure 167 shows converging air between sea breezes flowing inland from opposite coasts of the Cape Cod Peninsula. Later in the development of the converging sea breezes, the onset of convection is indicated by cumulus over the peninsula. Sail-plane pilots flying over this area as well as over Long Island, New York, have found good lift in the convergence lines caused by sea breezes blowing inland from both coasts of the narrow land strips. 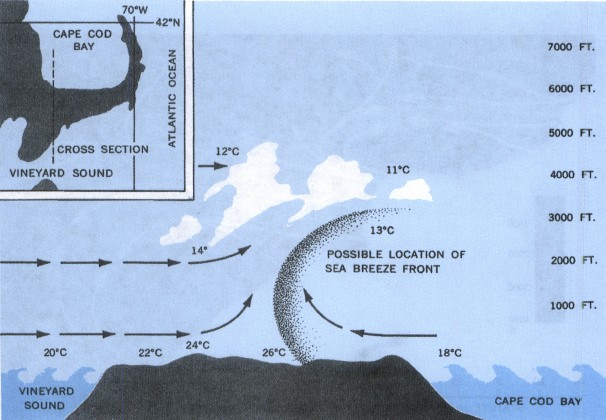 Sea breeze fronts have been observed along the shore lines of the Great Lakes. Weather satellites have also photographed this sea breeze effect on the western shore of Lake Michigan. It is quite likely that conditions favorable for soaring occur at times.