As air is forced aloft at the Equator and begins its high-level trek northward, the Coriolis force turns it to the right or to the east as shown in figure 22. Wind becomes westerly at about 30° latitude temporarily blocking further northward movement. Similarly, as air over the poles begins its low-level journey southward toward the Equator, it likewise is deflected to the right and becomes an east wind, halting for a while its southerly progress—also shown in figure 22. As a result, air literally “piles up” at about 30° and 60° latitude in both hemispheres. The added weight of the air increases the pressure into semipermanent high pressure belts. Figures 23 and 24 are maps of mean surface pressure for the months of July and January. The maps show clearly the subtropical high pressure belts near 30° latitude in both the Northern and Southern Hemispheres. 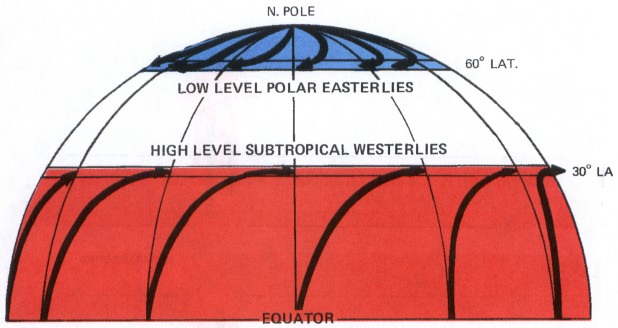 FIGURE 22. In the Northern Hemisphere, Coriolis force turns high level southerly winds to westerlies at about 30° latitude, temporarily halting further northerly progress. Low-level northerly winds from the pole are turned to easterlies, temporarily stopping further southward movement at about 60° latitude. Air tends to “pile up” at these two latitudes creating a void in middle latitudes. The restless atmosphere cannot live with this void; something has to give. 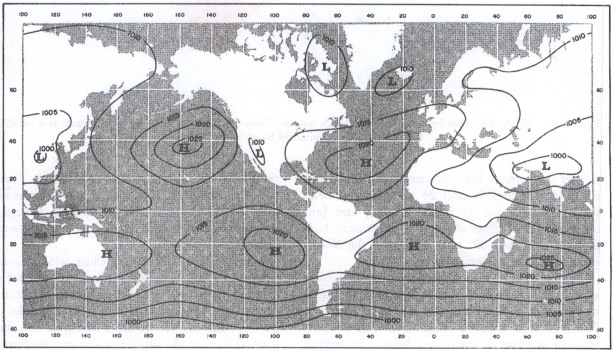 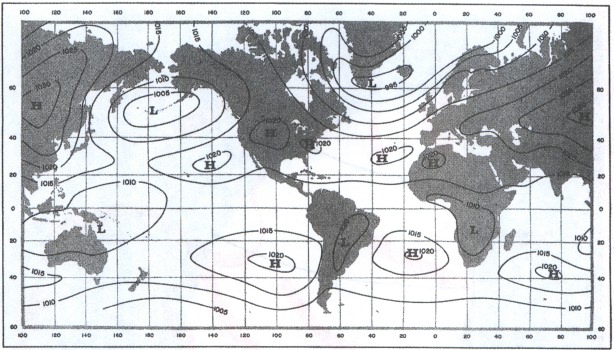 FIGURE 24. Mean world-wide surface pressure distribution in January. In this season, the pattern in figure 23 is reversed. In the cool Northern Hemisphere, cold continental areas are predominantly areas of high pressure while warm oceans tend to be low pressure areas. In the warm Southern Hemisphere, land areas tend to have low pressure; and oceans, high pressure. The subtropical high pressure belts are evident in both hemispheres. Note that the pressure belts shift southward in January and northward in July with the shift in the zone of maximum heating.

The building of these high pressure belts creates a temporary impasse disrupting the simple convective transfer between the Equator and the poles. The restless atmosphere cannot live with this impasse in its effort to reach equilibrium. Something has to give. Huge masses of air begin overturning in middle latitudes to complete the exchange.

Large masses of cold air break through the northern barrier plunging southward toward the Tropics. Large midlatitude storms develop between cold outbreaks and carry warm air northward. The result is a midlatitude band of migratory storms with ever changing weather. Figure 25 is an attempt to standardize this chaotic circulation into an average general circulation.

During summer, warm continents tend to be areas of low pressure and the relatively cool oceans, high pressure. In winter, the reverse is true—high pressure over the cold continents and low pressure over the relatively warm oceans. Figures 23 and 24 show this seasonal pressure reversal. The same pressure variations occur in the warm and cold seasons of the Southern Hemisphere, although the effect is not as pronounced because of the much larger water areas of the Southern Hemisphere.

Cold outbreaks are strongest in the cold season and are predominantly from cold continental areas. Summer outbreaks are weaker and more likely to originate from cool water surfaces. Since these outbreaks are masses of cool, dense air, they characteristically are high pressure areas.

As the air tries to blow outward from the high pressure, it is deflected to the right by the Coriolis force. Thus, the wind around a high blows clockwise. The high pressure with its associated wind system is an anticyclone. 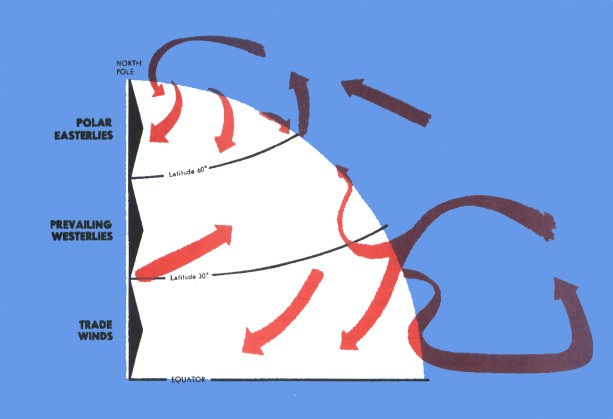 The high pressure belt at about 30° north latitude forces air outward at the surface to the north and to the south. The northbound air becomes entrained into the midlatitude storms. The southward moving air is again deflected by the Coriolis force becoming the well-known subtropical northeast trade winds. In midlatitudes, high level winds are predominantly from the west and are known as the prevailing westerlies. Polar easterlies dominate lowlevel circulation north of about 60° latitude. 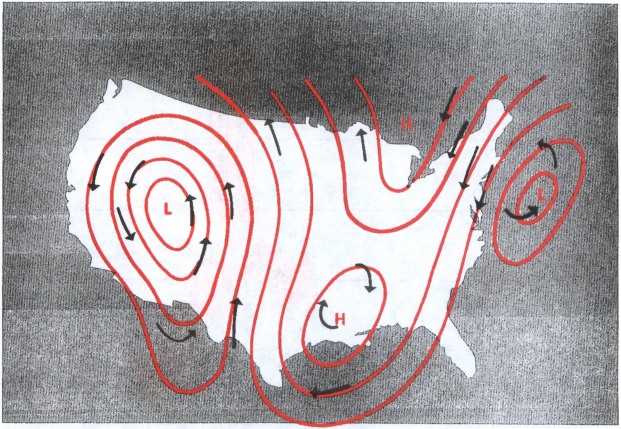 FIGURE 26. Air flow around pressure systems above the friction layer. Wind (black arrows) is parallel to contours and circulates clockwise around high pressure and counterclockwise around low pressure.

These three major wind belts are shown in figure 25. Northeasterly trade winds carry tropical storms from east to west. The prevailing westerlies drive midlatitude storms generally from west to east. Few major storm systems develop in the comparatively small Arctic region; the chief influence of the polar easterlies is their contribution to the development of midlatitude storms.

Our discussion so far has said nothing about friction. Wind flow patterns aloft follow isobars or contours where friction has little effect. We cannot, however, neglect friction near the surface.