Until now, we have dealt only with the general circulation and major wind systems. Local terrain features such as mountains and shore lines influence local winds and weather.

In the daytime, air next to a mountain slope is heated by contact with the ground as it receives radiation from the sun. This air usually becomes warmer than air at the same altitude but farther from the slope.

Colder, denser air in the surroundings settles downward and forces the warmer air near the ground up the mountain slope. This wind is a “valley wind” so called because' the air is flowing up out of the valley.

At night, the air in contact with the mountain slope is cooled by terrestrial radiation and becomes heavier than the surrounding air. It sinks along the slope, producing the “mountain wind” which flows like water down the mountain slope. Mountain winds are usually stronger than valley winds, especially in winter. The mountain wind often continues down the more gentle slopes of canyons and valleys, and in such cases takes the name “drainage wind.” It can become quite strong over some terrain conditions and in extreme cases can become hazardous when flowing through canyon restrictions as discussed in chapter 9.

A katabatic wind is any wind blowing down an incline when the incline is influential in causing the wind. Thus, the mountain wind is a katabatic wind. Any katabatic wind originates because cold, heavy air spills down sloping terrain displacing warmer, less dense air ahead of it. Air is heated and dried as it flows down slope as we will study in later chapters. Sometimes the descending air becomes warmer than the air it replaces.

Many katabatic winds recurring in local areas have been given colorful names to highlight their dramatic, local effect. Some of these are the Bora, a cold northerly wind blowing from the Alps to the Mediterranean coast; the Chinook, figure 29, a warm wind down the east slope of the Rocky Mountains often reaching hundreds of miles into the high plains; the Taku, a cold wind in Alaska blowing off the Taku glacier; and the Santa Ana, a warm wind descending from the Sierras into the Santa Ana Valley of California.

FIGURE 29. The “Chinook” is a katabatic (downslope) wind. Air cools as it moves upslope and warms as it blows downslope. The Chinook occasionally produces dramatic warming over the plains just east of the Rocky Mountains.

As frequently stated earlier, land surfaces warm and cool more rapidly than do water surfaces; therefore, land is warmer than the sea during the day; wind blows from the cool water to warm land—the “sea breeze” so called because it blows from the sea. At night, the wind reverses, blows from cool land to warmer water, and creates a “land breeze.” Figure 30 diagrams land and sea breezes. 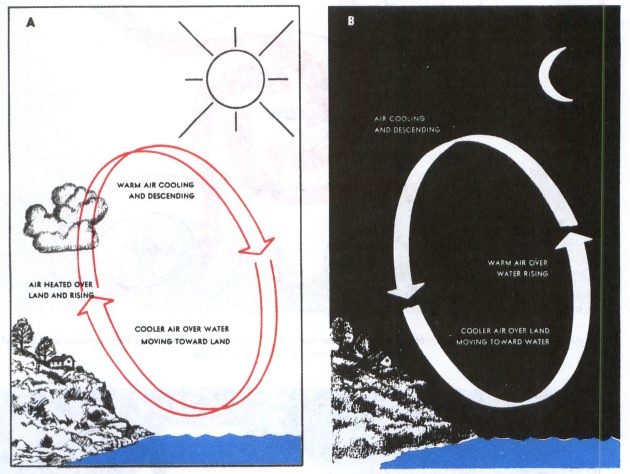 FIGURE 30. Land and sea breezes. At night, cool air from the land flows toward warmer water—the land breeze. During the day, wind blows from the water to the warmer land—the sea breeze.