Any change of state involves a heat transaction with no change in temperature. Figure 35 diagrams the heat exchanges between the different states. Evaporation requires heat energy that comes from the nearest available heat source. This heat energy is known as the “latent heat of vaporization,” and its removal cools the source it comes from. An example is the cooling of your body by evaporation of perspiration. 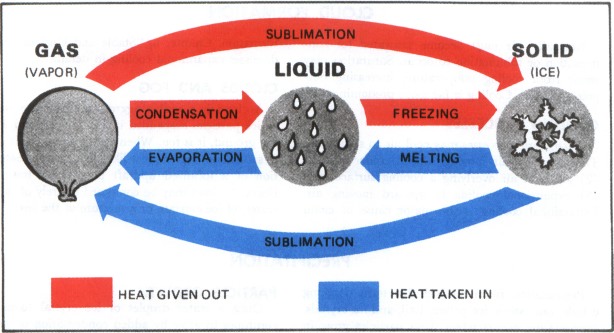 FIGURE 35. Heat transactions when water changes state. Blue arrows indicate changes that absorb heat. The absorbed heat remains hidden, or “latent” until a reverse change occurs. The red arrows show changes that release latent heat back to the surroundings. The heat exchange occurs whenever water changes state even when there is no change in temperature. These heat exchanges play important roles in suppressing temperature changes and in developing instability.

What becomes of this heat energy used by evaporation? Energy cannot be created or destroyed, so it is hidden or stored in the invisible water vapor. When the water vapor condenses to liquid water or sublimates directly to ice, energy originally used in the evaporation reappears as heat and is released to the atmosphere. This energy is “latent heat” and is quite significant as we learn in later chapters. Melting and freezing involve the exchange of “latent heat of fusion” in a similar manner. The latent heat of fusion is much less than that of condensation and evaporation; however, each in its own way plays an important role in aviation weather.

As air becomes saturated, water vapor begins to condense on the nearest available surface. What surfaces are in the atmosphere on which water vapor may condense?

During clear nights with little or no wind, vegetation often cools by radiation to a temperature at or below the dew point of the adjacent air. Moisture then collects on the leaves just as it does on a pitcher of ice water in a warm room. Heavy dew often collects on grass and plants when none collects on pavements or large solid objects. These more massive objects absorb abundant heat during the day, lose it slowly during the night, and cool below the dew point only in rather extreme cases.

Frost forms in much the same way as dew. The difference is that the dew point of surrounding air must be colder than freezing. Water vapor then sublimates directly as ice crystals or frost rather than condensing as dew. Sometimes dew forms and later freezes; however, frozen dew is easily distinguished from frost. Frozen dew is hard and transparent while frost is white and opaque.

To now, we have said little about clouds. What brings about the condensation or sublimation that results in cloud formation?