Convective currents are most active on warm summer afternoons when winds are light. Heated air at the surface creates a shallow, unstable layer, and the warm air is forced upward. Convection increases in strength and to greater heights as surface heating increases. Barren surfaces such as sandy or rocky wastelands and plowed fields become hotter than open water or ground covered by vegetation. Thus, air at and near the surface heats unevenly. Because of uneven heating, the strength of convective currents can vary considerably within short distances.

When cold air moves over a warm surface, it becomes unstable in lower levels. Convective currents extend several thousand feet above the surface resulting in rough, choppy turbulence when flying in the cold air. This condition often occurs in any season after the passage of a cold front.

Figure 76 illustrates the effect of low-level convective turbulence on aircraft approaching to land. Turbulence on approach can cause abrupt changes in airspeed and may even result in a stall at a dangerously low altitude. To prevent the danger, increase airspeed slightly over normal approach speed. This procedure may appear to conflict with the rule of reducing airspeed for turbulence penetration; but remember, the approach speed for your aircraft is well below the recommended turbulence penetration speed.

As air moves upward, it cools by expansion. A convective current continues upward until it reaches a level where its temperature cools to the same as that of the surrounding air. If it cools to saturation, a cloud forms. Billowy fair weather cumulus clouds, usually seen on sunny afternoons, are signposts in the sky indicating convective turbulence. The cloud top usually marks the approximate upper limit of the convective current. A pilot can expect to encounter turbulence beneath or in the clouds, while above the clouds, air generally is smooth. You will find most comfortable flight above the cumulus as illustrated in figure 77.

The pilot should also know that when air is too dry for cumulus to form, convective currents still can be active. He has little indication of their presence until he encounters turbulence. 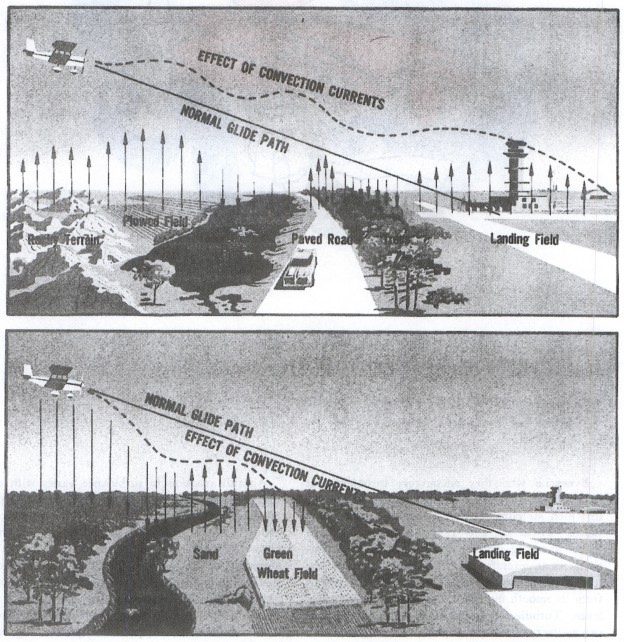 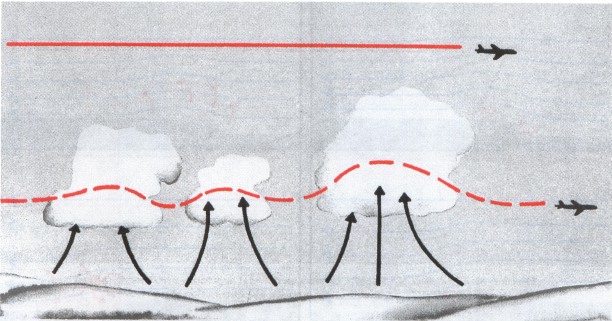