Forced upward motion creates an initial updraft. Cooling in the updraft results in condensation and the beginning of a cumulus cloud. Condensation releases latent heat which partially offsets cooling in the saturated updraft and increases buoyancy within the cloud. This increased buoyancy drives the updraft still faster drawing more water vapor into the cloud; and, for awhile, the updraft becomes self-sustaining. All thunderstorms progress through a life cycle from their initial development through maturity and into degeneration.

A thunderstorm cell during its life cycle progresses through three stages—(1) the cumulus, (2) the mature, and (3) the dissipating. It is virtually impossible to visually detect the transition from one stage to another; the transition is subtle and by no means abrupt. Furthermore, a thunderstorm may be a cluster of cells in different stages of the life cycle.

Although most cumulus clouds do not grow into thunderstorms, every thunderstorm begins as a cumulus. The key feature of the cumulus stage is an updraft as illustrated in figure 105(A). The updraft varies in strength and extends from very near the surface to the cloud top. Growth rate of the cloud may exceed 3,000 feet per minute, so it is inadvisable to attempt to climb over rapidly building cumulus clouds.

Early during the cumulus stage, water droplets are quite small but grow to raindrop size as the cloud grows. The upwelling air carries the liquid water above the freezing level creating an icing hazard. As the raindrops grow still heavier, they fall. The cold rain drags air with it creating a cold downdraft coexisting with the updraft; the cell has reached the mature stage.

Precipitation beginning to fall from the cloud base is your signal that a downdraft has developed and a cell has entered the mature stage. Cold rain in the downdraft retards compressional heating, and the downdraft remains cooler than surrounding air. Therefore, its downward speed is accelerated and may exceed 2,500 feet per minute. The downrushing air spreads outward at the surface as shown in figure 105(B) producing strong, gusty surface winds, a sharp temperature drop, and a rapid rise in pressure. The surface wind surge is a “plow wind” and its leading edge is the “first gust.” 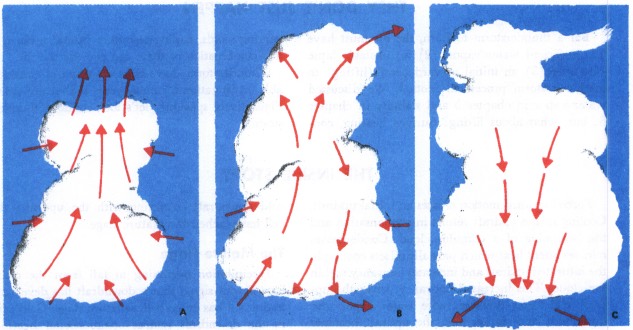 FIGURE 105. The stages of a thunderstorm. (A) is the cumulus stage; (B), the mature stage; and (C), the dissipating stage. Arrows depict air flow.

Individual thunderstorms measure from less than 5 miles to more than 30 miles in diameter. Cloud bases range from a few hundred feet in very moist climates to 10,000 feet or higher in drier regions. Tops generally range from 25,000 to 45,000 feet but occasionally extend above 65,000 feet.