Duration of the mature stage is closely related to severity of the thunderstorm. Some storms occur at random in unstable air, last for only an hour or two, and produce only moderate gusts and rainfall. These are the “air mass” type, but even they are dangerously rough to fly through. Other thunderstorms form in lines, last for several hours, dump heavy rain and possibly hail, and produce strong, gusty winds and possibly tornadoes. These storms are the “steady state” type, usually are rougher than air mass storms, and virtually defy flight through them.

Air mass thunderstorms most often result from surface heating. When the storm reaches the mature stage, rain falls through or immediately beside the updraft. Falling precipitation induces frictional drag, retards the updraft and reverses it to a downdraft. The storm is self-destructive. The downdraft and cool precipitation cool the lower portion of the storm and the underlying surface. Thus, it cuts off the inflow of water vapor; the storm runs out of energy and dies. A self-destructive cell usually has a life cycle of 20 minutes to 1 ½ hours.

Since air mass thunderstorms generally result from surface heating, they reach maximum intensity and frequency over land during middle and late afternoon. Off shore, they reach a maximum during late hours of darkness when land temperature is coolest and cool air flows off the land over the relatively warm water.

In a steady state storm, precipitation falls outside the updraft as shown in figure 106 allowing the updraft to continue unabated. Thus, the mature stage updrafts become stronger and last much longer than in air mass storms—hence, the name, “steady state.” A steady state cell may persist for several hours. 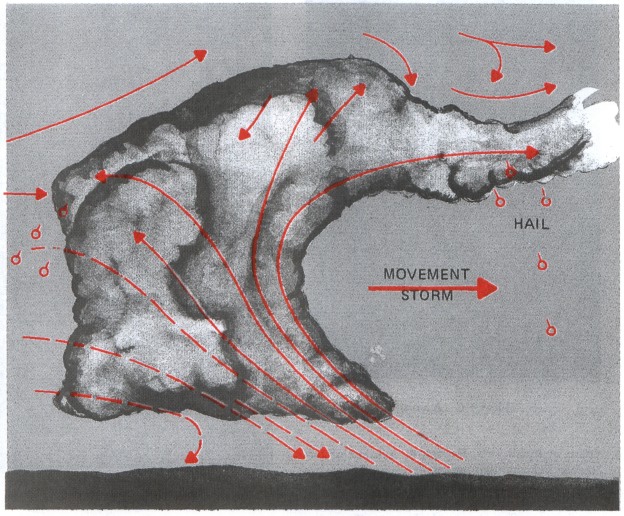 FIGURE 106. Schematic of the mature stage of a steady state thunderstorm cell showing a sloping updraft with the down-draft and precipitation outside the updraft not impeding it. The steady state mature cell may continue for many hours and deliver the most violent thunderstorm hazards.

Table of Contents
Previous Section: The Inside Story
Next Section: Hazards