A condensation trail, popularly contracted to “contrail,” is generally defined as a cloud-like streamer which frequently is generated in the wake of aircraft flying in clear, cold, humid air, figure 130. Two distinct types are observed—exhaust trails and aerodynamic trails. “Distrails,” contracted from dissipation trails, are produced differently from exhaust and aerodynamic trails. 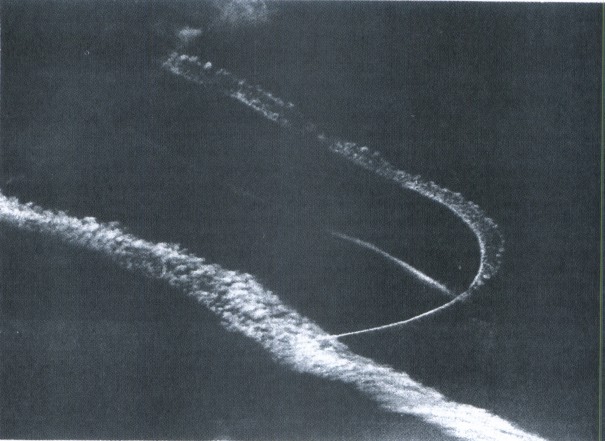 FIGURE 130. Contrails. The thin contrail is freshly formed by an aircraft (not visible) in the lower right center of the photograph.

The exhaust contrail is formed by the addition to the atmosphere of sufficient water vapor from aircraft exhaust gases to cause saturation or supersaturation of the air. Since heat is also added to the atmosphere in the wake of an aircraft, the addition of water vapor must be of such magnitude that it saturates or supersaturates the atmosphere in spite of the added heat. There is evidence to support the idea that the nuclei which are necessary for condensation or sublimation may also be donated to the atmosphere in the exhaust gases of aircraft engines, further aiding contrail formation. These nuclei are relatively large. Recent experiments, however, have revealed that visible exhaust contrails may be prevented by adding very minute nuclei material (dust, for example) to the exhaust. Condensation and sublimation on these smaller nuclei result in contrail particles too small to be visible.

In air that is almost saturated, aerodynamic pressure reduction around airfoils, engine nacelles, and propellers cools the air to saturation leaving condensation trails from these components. This type of trail usually is neither as dense nor as persistent as exhaust trails. However, under critical atmospheric conditions, an aerodynamic contrail may trigger the formation and spreading of a deck of cirrus clouds.

Contrails create one problem unique to military operations in that they reveal the location of an aircraft attempting to fly undetected. A more general operational problem is a cirrus layer sometimes induced by the contrail. The induced layer may make necessary the strict use of instruments by a subsequent flight at that altitude.

The term dissipation trail applies to a rift in clouds caused by the heat of exhaust gases from an aircraft flying in a thin cloud layer. The exhaust gases sometimes warm the air to the extent that it is no longer saturated, and the affected part of the cloud evaporates. The cloud must be both thin and relatively warm for a distrail to exist; therefore, they are not common.