A thunderstorm packs just about every weather hazard known to aviation into one vicious bundle. Although the hazards occur in numerous combinations, let's separate them and examine each individually.

The most violent thunderstorms draw air into their cloud bases with great vigor. If the incoming air has any initial rotating motion, it often forms an extremely concentrated vortex from the surface well into the cloud. Meteorologists have estimated that wind in such a vortex can exceed 200 knots; pressure inside the vortex is quite low. The strong winds gather dust and debris, and the low pressure generates a funnel-shaped cloud extending downward from the cumulonimbus base. If the cloud does not reach the surface, it is a “funnel cloud,” figure 109; if it touches a land surface, it is a “tornado,” figure 107; if it touches water, it is a “water spout,” figure 108. 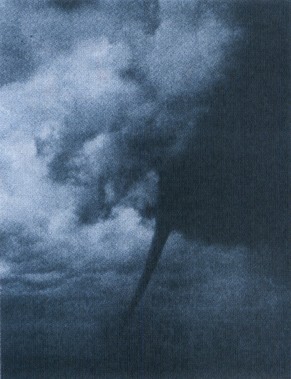 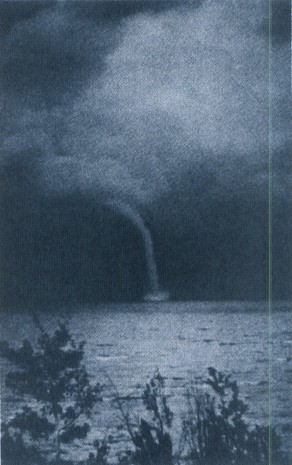 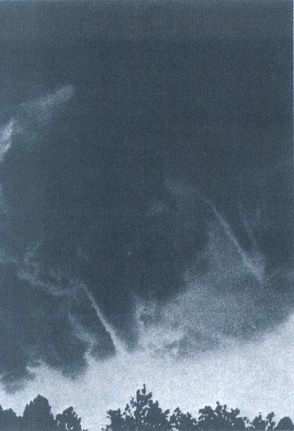 Tornadoes occur with isolated thunderstorms at times, but much more frequently, they form with steady state thunderstorms associated with cold fronts or squall lines. Reports or forecasts of tornadoes indicate that atmospheric conditions are favorable for violent turbulence.

An aircraft entering a tornado vortex is almost certain to suffer structural damage. Since the vortex extends well into the cloud, any pilot inadvertently caught on instruments in a severe thunderstorm could encounter a hidden vortex.

Families of tornadoes have been observed as appendages of the main cloud extending several miles outward from the area of lightning and precipitation. Thus, any cloud connected to a severe thunderstorm carries a threat of violence.

Frequently, cumulonimbus mamma clouds occur in connection with violent thunderstorms and tornadoes. The cloud displays rounded, irregular pockets or festoons from its base and is a signpost of violent turbulence. Figure 110 is a photograph of a cumulonimbus mamma cloud. Surface aviation reports specifically mention this and other especially hazardous clouds. 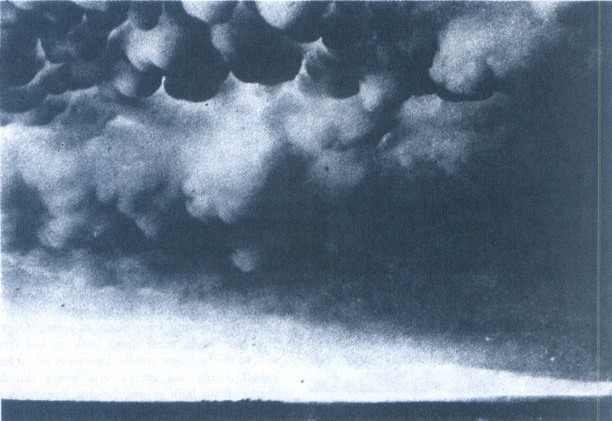 Tornadoes occur most frequently in the Great Plains States east of the Rocky Mountains. Figure 111 shows, however, that they have occurred in every State. 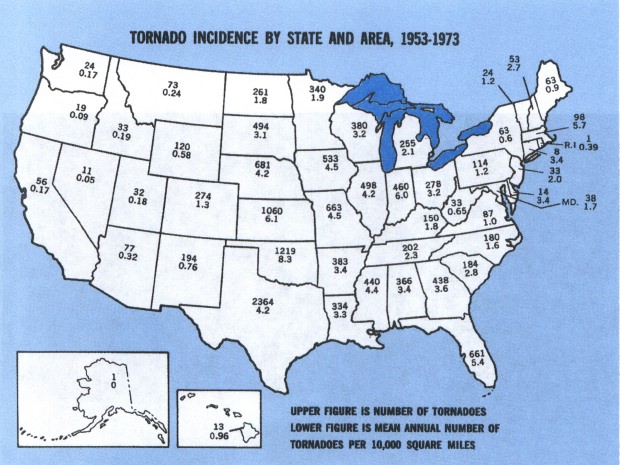 A squall line is a non-frontal, narrow band of active thunderstorms. Often it develops ahead of a cold front in moist, unstable air, but it may develop in unstable air far removed from any front. The line may be too long to easily detour and too wide and severe to penetrate. It often contains severe steady-state thunderstorms and presents the single most intense weather hazard to aircraft. It usually forms rapidly, generally reaching maximum intensity during the late afternoon and the first few hours of darkness. Figure 112 is a photograph of an advancing squall line. 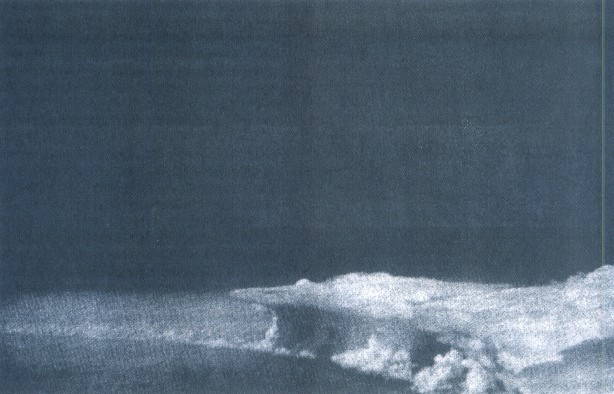 Hazardous turbulence is present in all thunderstorms; and in a severe thunderstorm, it can damage an airframe. Strongest turbulence within the cloud occurs with shear between updrafts and downdrafts. Outside the cloud, shear turbulence has been encountered several thousand feet above and 20 miles laterally from a severe storm. A low level turbulent area is the shear zone between the plow wind and surrounding air. Often, a “roll cloud” on the leading edge of a storm marks the eddies in this shear. The roll cloud is most prevalent with cold frontal or squall line thunderstorms and signifies an extremely turbulent zone. The first gust causes a rapid and sometimes drastic change in surface wind ahead of an approaching storm. Figure 113 shows a schematic cross section of a thunderstorm with areas outside the cloud where turbulence may be encountered. 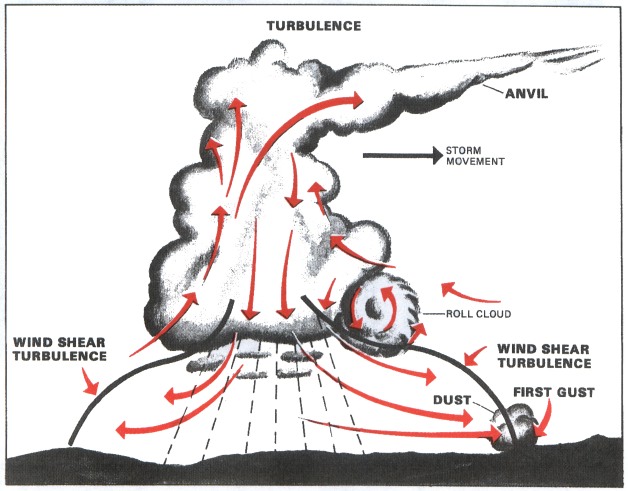 FIGURE 113. Schematic cross section of a thunderstorm. Note areas outside the main cloud where turbulence may be encountered.

Updrafts in a thunderstorm support abundant liquid water; and when carried above the freezing level, the water becomes supercooled. When temperature in the upward current cools to about −15° C, much of the remaining water vapor sublimates as ice crystals; and above this level, the amount of supercooled water decreases.

Supercooled water freezes on impact with an aircraft (see chapter 10). Clear icing can occur at any altitude above the freezing level; but at high levels, icing may be rime or mixed rime and clear. The abundance of supercooled water makes clear icing very rapid between 0° G and −15° C, and encounters can be frequent in a cluster of cells. Thunderstorm icing can be extremely hazardous.

Hail competes with turbulence as the greatest thunderstorm hazard to aircraft. Supercooled drops above the freezing level begin to freeze. Once a drop has frozen, other drops latch on and freeze to it, so the hailstone grows—sometimes into a huge iceball. Large hail occurs with severe thunderstorms usually built to great heights. Eventually the hailstones fall, possibly some distance from the storm core. Hail has been observed in clear air several miles from the parent thunderstorm.

As hailstones fall through the melting level, they begin to melt, and precipitation may reach the ground as either hail or rain. Rain at the surface does not mean the absence of hail aloft. You should anticipate possible hail with any thunderstorm, especially beneath the anvil of a large cumulonimbus. Hailstones larger than one-half inch in diameter can significantly damage an aircraft in a few seconds. Figure 114 is a photograph of an aircraft flown through a “hail” of a thunderstorm. 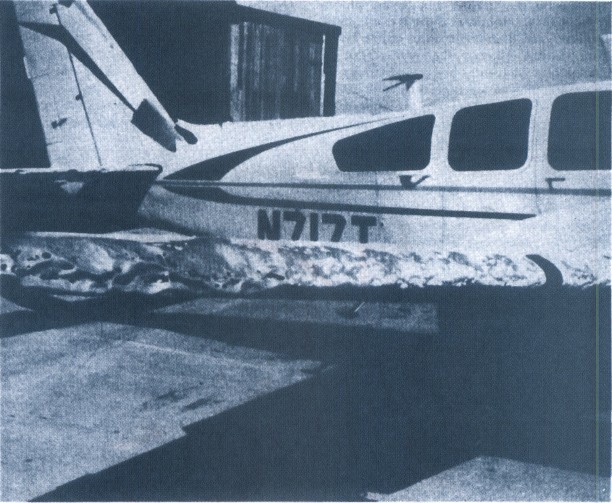 FIGURE 114. Hail damage to an aircraft.

Visibility generally is near zero within a thunderstorm cloud. Ceiling and visibility also can become restricted in precipitation and dust between the cloud base and the ground. The restrictions create the same problem as all ceiling and visibility restrictions; but the hazards are increased many fold when associated with the other thunderstorm hazards of turbulence, hail, and lightning which make precision instrument flying virtually impossible.

Pressure usually falls rapidly with the approach of a thunderstorm, then rises sharply with the onset of the first gust and arrival of the cold down-draft and heavy rain showers, falling back to normal as the storm moves on. This cycle of pressure change may occur in 15 minutes. If the altimeter setting is not corrected, the indicated altitude may be in error by over 100 feet.

Electricity generated by thunderstorms is rarely a great hazard to aircraft, but it may cause damage and is annoying to flight crews. Lightning is the most spectacular of the electrical discharges.

A lightning strike can puncture the skin of an aircraft and can damage communication and electronic navigational equipment. Lightning has been suspected of igniting fuel vapors causing explosion; however, serious accidents due to lightning strikes are extremely rare. Nearby lightning can blind the pilot rendering him momentarily unable to navigate either by instrument or by visual reference. Nearby lightning can also induce permanent errors in the magnetic compass. Lightning discharges, even distant ones, can disrupt radio communications on low and medium frequencies.

A few pointers on lightning:

Precipitation static, a steady, high level of noise in radio receivers is caused by intense corona discharges from sharp metallic points and edges of flying aircraft. It is encountered often in the vicinity of thunderstorms. When an aircraft flies through clouds, precipitation, or a concentration of solid particles (ice, sand, dust, etc.), it accumulates a charge of static electricity. The electricity discharges onto a nearby surface or into the air causing a noisy disturbance at lower frequencies.

The corona discharge is weakly luminous and may be seen at night. Although it has a rather eerie appearance, it is harmless. It was named “St. Elmo's Fire” by Mediterranean sailors, who saw the brushy discharge at the top of ship masts.

Table of Contents
Previous Section: Rough and Rougher
Next Section: Thunderstorms and Radar