Diagrammed in figure 124, the jet stream is a narrow, shallow, meandering river of maximum winds extending around the globe in a wavelike pattern. A second jet stream is not uncommon, and three at one time are not unknown. A jet may be as far south as the northern Tropics. A jet in midlatitudes generally is stronger than one in or near the Tropics. The jet stream typically occurs in a break in the tropopause as shown in figure 123. Therefore, a jet stream occurs in an area of intensified temperature gradients characteristic of the break. 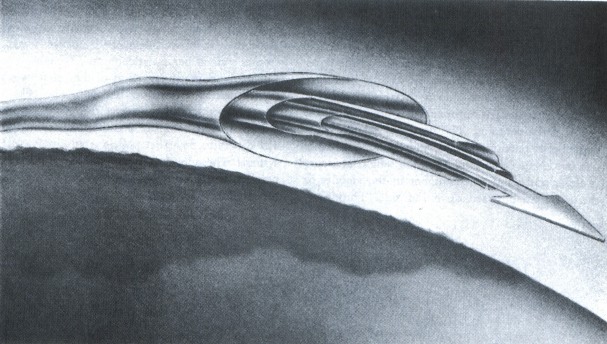 The concentrated winds, by arbitrary definition, must be 50 knots or greater to classify as a jet stream. The jet maximum is not constant; rather, it is broken into segments, shaped something like a boomerang as diagrammed in figure 125. 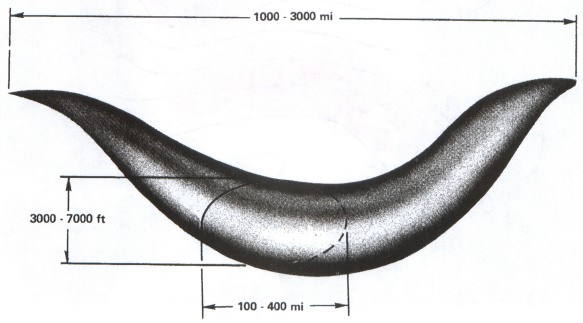 Jet stream segments move with pressure ridges and troughs in the upper atmosphere. In general they travel faster than pressure systems, and maximum wind speed varies as the segments progress through the systems. In midiatitude, wind speed in the jet stream averages considerably stronger in winter than in summer. Also the jet shifts farther south in winter than in summer.

Figure 126 shows a map with two jet streams. The paths of the jets approximately conform to the shape of the contours. The northerly jet has three segments of maximum wind, and the southerly one has two. Note how spacing of the height contours is closer and wind speeds higher in the vicinity of the jets than outward on either side. Thus horizontal wind shear is evident on both sides of the jet and is greatest near the maximum wind segments. 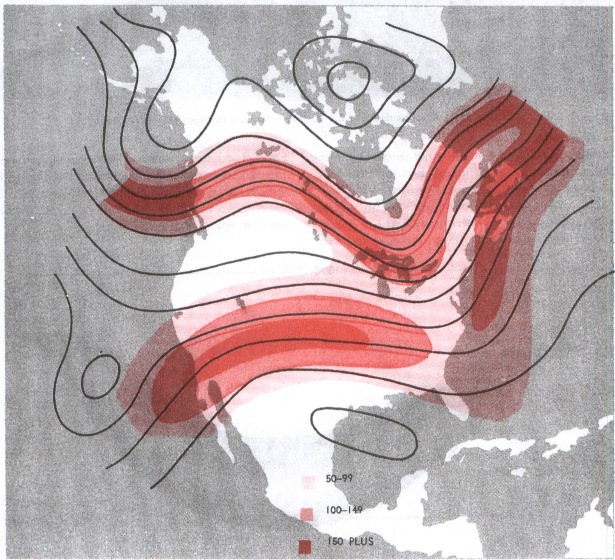 FIGURE 126. Multiple jet streams. Note the “segments” of maximum winds embedded in the general pattern. Turbulence usually is greatest on the polar sides of these maxima.

Strong, long-trajectory jet streams usually are associated with well-developed surface lows and frontal systems beneath deep upper troughs or lows. Cyclogenesis is usually south of the jet stream and moves nearer as the low deepens. The occluding low moves north of the jet, and the jet crosses the frontal system near the point of occlusion. Figure 127 diagrams mean jet positions relative to surface systems. These long jets mark high level boundaries between warm and cold air and are favored places for cirriform cloudiness. 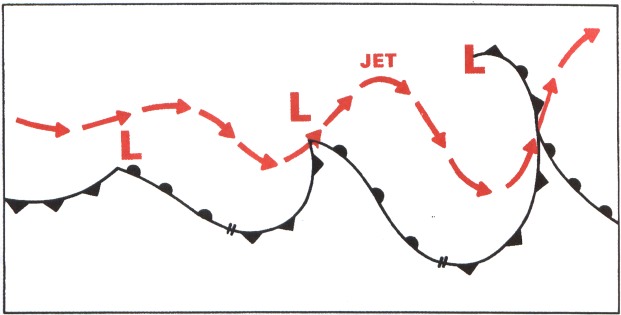 FIGURE 127. Mean jet positions relative to surface systems. Cyclogenesis (development) of a surface low usually is south of the jet as shown on the left. The deepening low moves nearer the jet, center. As it occludes, the low moves north of the jet, right; the jet crosses the frontal system near the point of occlusion.